A new theatre blog to visit

Playwright Robert Reid has launched a new venture; a combined blog and podcast called Flashing Twelve O'Clock. Go visit!
Posted by richardwatts at 11:21 am No comments: 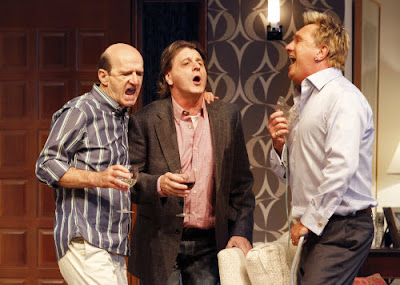 Last week I attended the world premiere of Don Parties On, the latest work from Australian playwright David Williamson, at the MTC. I was less than impressed. My full review is available at Arts Hub, here, but here's a snippet to whet your appetite:

"Around sound-bites of Kerry O’Brien discussing the unfolding 2010 election results, Williamson’s assemblage of characters bicker, bellow, and pontificate. Here one of the first flaws of the play becomes quickly evident: these constructs don’t speak in dialogue, they talk in exposition and rhetoric, sounding more like Williamson himself than well realised characters.

Too, they’re thinly drawn; two dimensional at best (with the sole exception of the caustic and cutting Jenny, who brings some much needed life to the party when she arrives). At worst, in the case of the snivelling man-child Richard and Roberta, his drama queen lover, they’re totally one dimensional; an impression that is not helped by both Gilshenan and Shiels badly overplaying their roles, a fault that can only be laid at the feet of director Robyn Nevin, who should have pulled them back.

Other faults in the production, such as the static blocking of the characters on stage, are definitely Nevin’s fault also, but most of the flaws in the play are clearly Williamson’s."

Happy reading!
Posted by richardwatts at 12:41 pm No comments:

I didn't see anywhere near as many films in 2010 as in previous years, as a consequence of investing more heavily in the performing arts over the past 12 months, but I still managed to get to the cinema 56 times to see a range of new releases and festival-only flicks. More than most people, obviously; considerably less than my many professional film-reviewing friends.

Since I missed out on quite a few of the so-called 'best' films of the year (e.g. The White Ribbon, Un prophète) I'm going to list my personal favourites - the films that most moved or excited me - rather than claiming that these are the absolute cinematic highlights of the year.

Precious (Dir. Lee Daniels, USA, 2009)
A harrowing film about redemption, Precious is the story of an obese, illiterate African-American teenager (Gabourey Sidibe) who is pregnant to her own father for the second time; whose mother belittles and beats her; but who refuses to let life grind her down. The film’s grim nature may put some people off, and certainly the cavalcade of misery Precious lives through is difficult to stomach, but while director Lee Daniel doesn’t skimp on the grim details of the story, he also imbues the film with a palpable sense of grace. Harrowing and difficult viewing, but ultimately uplifting and inspiring.

Children of God (Dir. Kareen Mortimer, Bahamas, 2009) A powerful and beautiful story about love, fear and religious intolerance set in 2004, when anti-gay hysteria was at a violent peak in the Bahamas, Children of God is the island nation's first gay feature film, and screened at the 2010 Melbourne Queer Film Festival. The stories of three people - a young gay artist, a closeted black man, and the deeply religious wife of a closeted Christian pastor - slowly intertwine in this intelligent, exquisitely shot and emotionally bruising drama.

The Man Who Loved Yngve (Dir. Stian Kristiansen, Norway, 2008)
A breath of fresh air for that tired old genre, the coming out film, this charming coming of age film from Sweden also showed at the 2010 MQFF, having previously screened in 2009 at the Nordic Film Festival (which sadly appears to have vanished off the festival calendar following its one-off appearance that year). Set in 1989, and opening with a direct-to-camera monologue that quickly establishes the light and engaging tone of the film, The Man Who Loved Yngve centres on Jarle Klepp (Rolf Kristian Larsen), a bored teenager living in Norway’s oil capital, Stavanger, whose life in turned upside down when he falls in love with a new student, Yngve (Ole Christoffer Ertvåg). Incisive direction ensures that the film authentically captures the heartbreak and joy adolescent romance; and the film’s refusal to resort to cliché - and the filmmakers’ decision not to pigeonhole Jarle’s sexuality (films acknowledging bisexual identity are rare on the queer festival circuit) - were especially welcome. 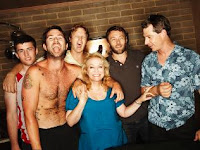 Animal Kingdom (Dir. David Michôd, Australia, 2010)
The most highly acclaimed Australian film of the year, David Michôd's debut feature is a truly remarkable, albeit low key, domestic drama about a family of career criminals; and was partially inspired by the 1988 murder of two young policemen in Walsh Street, South Yarra and the unsuccessful court case which followed. Central performances from Jacki Weaver, Ben Mendelsohn and understated newcomer James Frecheville are all excellent, as is the sound design; and the film caught my attention right from the word go thanks to its understated and surprising opening scene. Rather than a flashy, high-octane gangster flick, Michôd has crafted an oppressive, subtle and powerful drama, where suspense is created by the camera lingering and holding a shot instead of leaping from scene to scene. It’s a remarkably confident debut feature, and a truly compelling film. 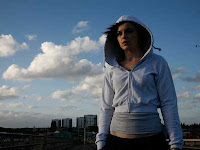 Fish Tank (Dir. Andrea Arnold, UK, 2009) Set on a housing estate in rural Essex, Fish Tank for me featured one of the best performances of the year: a fragile, violent, angry and compelling turn by untrained actor Katie Jarvis making her screen debut. Andrea Arnold's second feature film as director features characters who are simultaneously unlikeable and deeply sympathetic, explores themes of alienation and sexual awakening, and casts a bleak eye over the fractured families of modern Britain. Grim but powerful, it unfortunately seems to have been one of most overlooked films to be released in Australia in 2010, and more's the pity, for it certainly deserved a wider audience.

Inception (Dir. Christopher Nolan, USA, 2010) Though initially over-hyped, and then consequently suffering somewhat from a critical and popular backlash, Nolan's intelligent blockbuster Inception was certainly one of the standout films of the year. It's dreams-within-a-dream approach to the plot may have confused some audiences but I found it an engaging storytelling construct; and its reliance on characters over CGI (though when such effects were used, they were dazzling) made for a winning cinematic experience. And for me, anything that gives UK actor Tom Hardy wider exposure has got to be a good thing.

Red Hill (Dir. Patrick Hughes, Australia, 2010) Kinetic direction, strong performances, superb cinematography and an excellent sound design made for an impressive first outing for directorial newcomer Patrick Hughes. This contemporary western set in Australia's high country, around Omeo in regional Victoria, failed to connect with audiences at the box office, which was a real shame given the way it successfully presented the issue of relationships between Indigenous and White Australians under a cop movie veneer.

Winter's Bone (Dir. Debra Granik, USA, 2010) Debra Granik’s second feature film is a vivid exploration of the lives of the USA’s working class and the impact methamphetamines have had on their lives; and a chilling and compelling slice of rural noir set in the Ozark Mountains in southern Missouri. As the young lead, Jennifer Lawrence was outstanding - if she doesn't get an Oscar nomination I'll be very much surprised - while the supporting cast, and the film's vivid captured sense of place, are equally compelling. Every scene in Winter's Bone breathes authenticity on rank, whiskey-scented breath; it's a grim yet restrained masterpiece.

I Love You Philip Morris (Dir. Glenn Ficarra & John Requa, USA, 2009)
Gleefully offensive, wonderfully romantic, and featuring an electrifying chemistry between its two male leads, Jim Carrey and Ewan McGregor, this hard-to-believe-it's-based-on-a-true-story-but-it-is prison rom-com was hands down the funniest film I saw all year. The fact that it still hasn't got distribution in Australia is nothing short of criminal.

Honourable mentions: Bran Nue Dae, The Road, Welcome, The Kids Are All Right, Scott Pilgrim vs The World, The Social Network, The King's Speech.

Dishonourable Mentions: The Wolfman, Robin Hood, The Wedding Party, Clash of the Titans.